I'm working on a new Orchard module at the moment for the Orchard Module Contest. It's been my evening project for the last week and I've had a really good day working on it today. I've figured out most of the difficult stuff so it's looking like I will (fingers crossed) finish in time for the deadline on 15 March. There are still a lot of things to add and tidy up though. 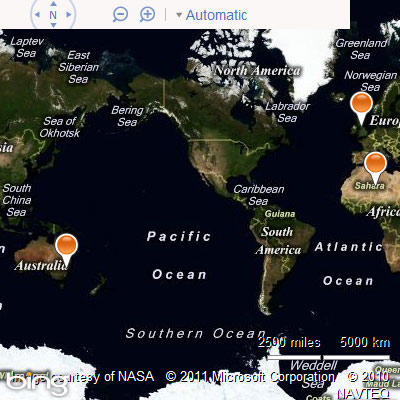 The module lets you create content items for places and then add them to a Bing map. Even if it doesn't win, it's something that should help with several project ideas I have. It would be nice to win though.

When it's finished it will be published in the Orchard Gallery and the source code will be available on Codeplex.

Looks good richard!... I like the integration between Orchard and Bing. Will the code be abstracted enough to plug in to google maps?

Good luck with the competition :)

@Nicholas so far all the Bing Code is in the views, so you should be able to switch that out quite easily.