This project didn't quite get finished because The Faculty Internet Cafe closed before they were finished. 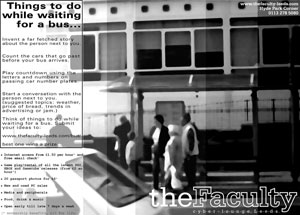 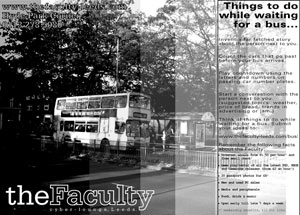 The idea behind my posters were that generally people at bus stops are quite bored. They've got time on their hands, can read quite a lot and might want to think about stuff.

The posters suggested things you could do at a bus stop to pass the time. They also asked you to think of new things and submit them to the website. These were going to be put in later versions of the posters.

I also wanted to make each poster unique to the bus stop it was on and include images of the bus stop. This was to emphasise that we were a local small business.

I'd hoped to make them nice and easily removeable so people would take them and talk about them.